Difference between revisions of "Managing Python environments and Jupyter kernels"

Many projects that use Python code require careful management of the respective Python environments. Rapid changes in package dependencies, package version conflicts, deprecation of APIs (function calls) by individual projects, and obsolescence of system drivers and libraries make it virtually impossible to use an arbitrary set of packages or create one all-encompassing environment that will serve everyone's needs over long periods of time. The high velocity of changes in the popular ML/DL frameworks and packages and GPU computing exacerbates the problem.

2. The problem with pip install

Most guides and project documentation for installing python packages recommend using pip install for package installation. While pip is easy to use and works for many use cases, there are some major drawbacks. If you have spent any time working in Python, you will likely have seen (and may have run) suggestions to pip install ____, or within Jupyter !pip install ____, to install one or more packages. There are a few issues with doing pip install on a supercomputer like HiPerGator, though:

3. Conda and Mamba to the rescue!

conda and the newer, faster, drop-in replacement mamba, were written to solve some of these issues. They represent a higher level of packaging abstraction that can combine compiled packages, applications, and libraries as well as pip-installed python packages. They also allow easier management of project-specific environments and switching between environments as needed. They make it much easier to report the exact configuration of packages in an environment, facilitating reproducibility (recreation of an environment on a different system). Moreover, conda environments don't even have to be activated to be used. In most cases adding the path to the conda environment's 'bin' directory to the $PATH in the shell environment is sufficient for using them.

Check out the UFRC Help page on conda for additional information.

conda and mamba get packages from channels, or repositories of prebuilt packages packages. While there are several available channels, like the main conda-forge, not every Python package is available from a conda channel as they have to be packaged for conda first. You may still need to use pip to install some packages as noted later. However, conda still helps manage environment by installing packages into separate directory trees rather than trying to install all packages into a single folder that pip does.

conda's behavior is controlled by a configuration file in your home directory called .condarc. The dot at the start of the name means that the file is hidden from 'ls' file listing command by default. If you have not run conda before, you won't have this file. Whether the file exists or not, the steps here will help you modify the file to work best on HiPerGator. First load of the conda environment module on HiPerGator will put the current best practice .condarc into your home directory.

conda caches (keeps a copy) of all downloaded packages by default in the ~/.conda/pkgs directory tree. If you install a lot of packages you may end up filling up your home quota. You can change the default package cache path. To do so, add or change the pkgs_dirs setting in your ~/.condarc configuration file e.g.:

You can also change the default path for the name environments (conda create -n NAME) if you prefer to keep all conda environments in the same directory tree. To do so, add or change the envs_dirs setting in the ~/.condarc configuration file e.g.:

Expand this section to view instructions for editing your ~/.condarc file.

One way to edit your ~/.condarc file is to type: nano ~/.condarc`

If the file is empty, paste in the text below, editing the env_dirs: and pkg_dirs as below. If the file has contents, update those lines.

Your ~/.condarc should look something like this when you are done editing (again, replacing group and user in the paths with your group and username).

Before we can run conda or mamba on HiPerGator, we need to load the conda module:

5.2.1. Create a name based environment

To create your first name based (see path based instructions below)conda environment, run the following command. In this example, I am creating an environment named hfrl:

Here's a screenshot of the output from running that command. Yours should look similar. 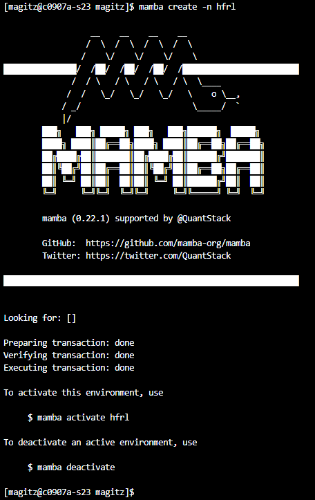 Note: You do not need to manually create the folders that you setup in your ~/.condarc file. mamba will take care of that for you.

5.2.2. Create a path based environment

Notice that your command prompt changes when you activate an environment to indicate which environment is active, showing that in parentheses before the other information:

Note: path based environment activation is really only needed for package installation. For using the environment just add the path to its bin directory to $PATH in your job script.

7. Install packages into our environment with mamba install

Now we are ready to start adding things to our environment.

There are a few ways to do this. We can install things one-by-one with either mamba install ____ or pip install ____. We will look at using yaml files below.

Note: when an environment is active, running pip install will install the package into that environment. So, even if you continue using pip, adding conda environments solves the problem of everything being installed in one location--each environment has its own site-packages folder and is isolated from other environments.

Now we are ready to install packages using mamba install ___.

If you plan on using a GPU: it is important to both make the environment on a node with a GPU (within a Jupyter job for example) and to start by installing the cudatoolkit and pytorch, tensorflow or other frameworks.
If you just mamba install tensorflow, you will get a version compiled with an older CUDA, which will be extremely slow or not recognize the GPU at all...ask me how I know 🤦. Same for pytorch.

From the PyTorch Installation page, we should use:

When you run that command, mamba will look in the repositories for the specified packages and their dependencies. Note we are specifying a particular version of cudatoolkit. As of May, 2022, that is the correct version on HiPerGator. Here's a screenshot of part of the output: 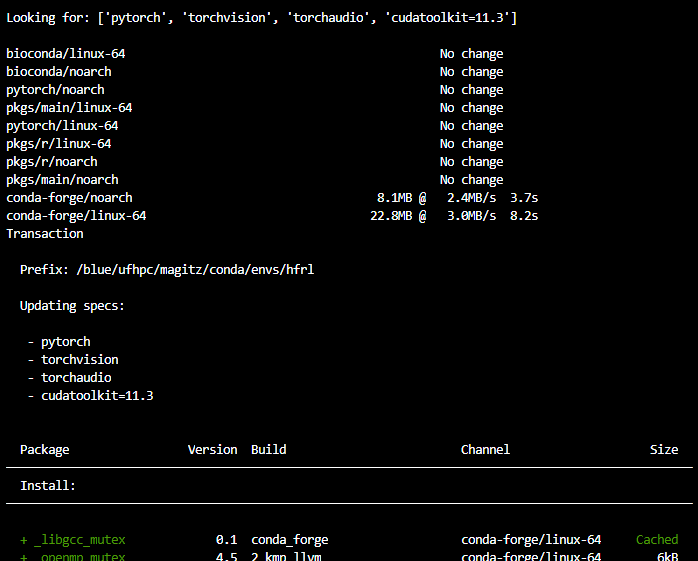 mamba will list the packages it will install and ask you to confirm the changes. Typing 'y' or hitting return will proceed; 'n' will cancel:

Finally, mamba will summarize the results:

While not needed for this tutorial, many users will want TensorFlow instead of PyTorch, so we will provide the command for that here. To install TensorFlow, use this command:

This post at conda-forge has additional information and tips for installing particular versions or installing on a non-GPU node: GPU enabled TensorFlow builds on conda-forge.

This tutorial creates an environment for the Hugging Face Deep Reinforcement Learning Course, you can either follow along with that or adapt to your needs.

You can list more than one package at a time in the mamba install command. We need a couple more, so run:

8. Add packages to our environment with pip install

As noted above, not everything is available in a conda channel. For example the next thing we want to install is huggingface_sb3.

If we type mamba install huggingface_sb3, we get a message saying nothing provides it:

If we know of a conda source that has that package, we can add it to the channels: section of our ~/.condarc file. That will prompt mamba to include that location when searching.

But many things are only available via pip. So...

That will install huggingface_sb3. Again, because we are using environments and have the hfrl environment active, pip will not install huggingface_sb3 in our ~/.local/lib/python3.X/site-packages/ directory, but rather within in our hfrl directory, at /blue/group/user/conda/envs/hfrl/lib/python3.10/site-packages. This prevents the issues and headaches mentioned at the start.

As with mamba, we could list multiple packages in the pip install command, but again, we only need one more:

9. Use your kernel from command line or scripts

Now that we have our environment ready, we can use it from the command line or a script using something like:

or with path based environments:

10. Setup a Jupyter Kernel for our environment

Often, we want to use the environment in a Jupyter notebook. To do that, we can create our own Jupyter Kernel.

In order to use an environment in Jupyter, we need to make sure we install the jupyterlab package in the environment:

10.2. Copy the template_kernel folder to your path

On HiPerGator, Jupyter looks in two places for kernels when you launch a notebook:

Note: This also renames the folder in the copy. It is important that the directory names be distinct in both your directory and the global /apps/jupyterhub/kernels/ directory.

The template_kernel directory has four files: the run.sh and kernel.json files will need to be edited in a text editor. We will use nano in this tutorial. The logo-64X64.png and logo-32X32.png are icons for your kernel to help visually distinguish it from others. You can upload icons of those dimensions to replace the files, but they need to be named with those names.

Let's start editing the kernel.json file. As an example, we can use:

The template has most of the information and notes on what needs to be updated. Edit the file to look like:

The run.sh file needs the path to the python application that is in our environment. The easiest way to get that is to make sure the environment is activated and run the command: which python

The path should look something like: /blue/group/user/conda/envs/hfrl/bin/python. Copy that path.

Edit the run.sh file with nano:

The file should looks like this, but with your path:

If you want something more than the generic Python icon, you can place the logos with something else, like these:

If you are doing this in a Jupyter session, refresh your page. If not, launch Jupyter.

Your kernel should be there ready for you to use!

Now that you have your environment working, you may want to document its contents and/or share it with others. The environment.yml file defines the environment and can be used to build a new environment with the same setup.

You can inspect the contents of this file with cat hfrl.yml. This file defines the packages and versions that make up the environment as it is at this point in time. Note that it also includes packages that were installed via pip.

13. Create an environment from a yaml file

If you share the environment yaml file created above with another user, they can create a copy of your environment using the command:

They may need to edit the last line to change the location to match where they want their environment created.

It is possible to create a shared environment accessed by a group on HiPerGator, storing the environment in, for example, /blue/group/share/conda. In general, this works best if only one user has write access to the environment. All installs should be made by that one user and should be communicated with the other users in the group.